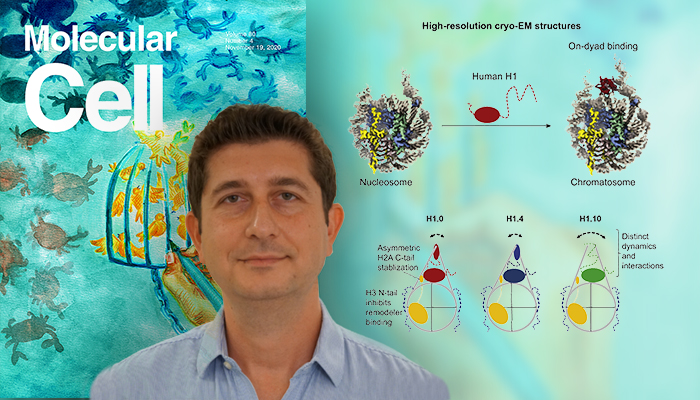 A research study which involves Dr. Seyit Kale, the group leader of the Computational Biophysics lab at IBG, and researchers from the U.S. NIH and Queen's University of Canada was recently published in the prestigious journal Molecular Cell (IF: 15.6)

The article sheds light on the diverse structures chromatin can assume at the molecular level. This diversity stems from an epigenetic phenomenon known as histone variant exchange, whose misregulation can underlie a broad set of diseases.

At the molecular level, our genomic material is packed into "tiny wheels" known as nucleosomes. The nucleosomes wrap around 150 base pairs into a core of 4 pairs of highly conserved proteins known as histones. Higher level organisms such as humans express a fifth type of histone, the "linker histone", which binds the nucleosome core particle from outside, and regulates its integration into the chromatin fiber. Linker histones exist in variants, i.e., versions of the same protein with slightly different sequence compositions, some of whose roles are yet to be understood.

Dr. Kale's study demonstrates that not all linker histones "pack" the chromatin, but that some variants maintain a structurally open state where internucleosomal DNA is exposed. These conformations are implicated in chromatin remodeling and gene expression, for which the linker histone serves as the communicator between the chromatin factors and the nucleosome.

The IBG researcher of the study, Dr. Kale, highlights the importance of fundamental physical sciences in contributing to our understanding of life at the molecular level. He states that, “With the rising power of high performance computing, conceptual thinking and ‘in silico’ tools have, today, the power of not only complementing, but also guiding and even drastically reducing the accompanying wet-lab work. Success, in this context, can only be possible through interdisciplinary efforts in their truest sense, where scientists with different skill sets gather for the sole purpose of understanding the nature.”

We congratulate Dr. Kale and other researchers who contributed to this important study.